De Haar Castle
Previous message
Back to news
Next message

In the nineties, we started a small shop called Elf Fantasy Shop in a 16th-century building in the center of Delft. The first items we bought were half-meter-high garden gnomes. There were very few statues available that depict characters from myths, sagas, and fantasy stories. The real boom in dragon statues, elf figures, and other fantasy forms only started in that decade. Garden gnomes had long earned their illustrious spurs as petrified natural creatures. But to what did they owe their popularity and when did their career start?

The German sculptor Philip Griebel is known as the first to shape the garden gnome as we know it today: with a red cap, a white beard and often armed with a pickaxe or shovel. He made the first garden gnome from clay in 1880. His garden statues quickly became popular all over Germany and Poland. The family business is still the most successful producer of garden gnomes to this day. 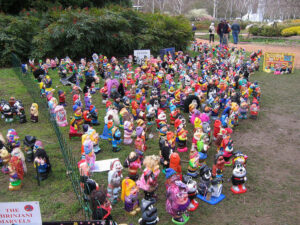 From status symbol to kitch

Today, most garden gnomes are made of plastic, but not all. I remember driving to Poland in the late 1990s. Just across the German border, 1.5-meter high garden gnomes were sold along the highway. I wondered why someone would put a giant garden gnome away in his trunk, but upon inquiry, it turned out that there were villages in the east of Germany where it was a tradition among the inhabitants to beat the garden gnome in the clay brains every year because this would bring happiness. Perhaps this tradition was once encouraged by a clever garden gnome manufacturer.

But before mass production of gnomes broke out and scared some gardeners, they were the preserve of prominent families who could afford a handmade, stylish, classic Griebel gnome. But this elite class’s love for the bearded males was over when cheap – and often inferior – gnomes populated the gardens of the middle and lower classes. From that moment on, the garden gnome phenomenon was looked down upon. It was ‘not done’ to pollute your garden with such a colorful, plastic figure. The term ‘gnomophobic’ originated to express the sometimes outright hatred that descended on the small people.

Nowadays, however, good quality garden gnomes – on the European mainland increasingly referred to by the English term ‘gnomes’ – seem to be making a comeback again. They are even allowed here and there again at elite garden exhibitions. The ‘gnomophobes’ ultimately draw the short straw.

But these little bearded men didn’t just appear out of the blue. Griebel had not sucked his creation out of his imaginative thumb. If you search carefully, you will discover that they are rooted almost literally in the ancient folklore and sagas of Europe. Philip Griebel’s Germany had emerged as a new nation just a decade earlier in 1871. There was indeed a search for the origins, the roots of the German people: what made a German a German? Obviously, mythological narratives were an important source. It was the time of Wagner’s opera “das Nibelungenlied” with Alberich the dwarf as one of the protagonists, and of the to many completely unknown opera “die Feeen”, Wagner’s first complete opera, which premiered only in 1888.

Besides gnomes, there are also dwarfs. The two terms are often confused. But there is a difference between the two appearances. They are often not the most beautiful of the mother, but the gnome generally has a more pleasing appearance, while the dwarf can sometimes be called downright ugly.

The dwarf has its origins in the old Norse sagas, while the gnome seems to get its name from the 16th-century doctor and alchemist Paracelsus from Switzerland. Paracelsus linked nature beings to the four elements water, fire, air, and earth that played an important role in alchemy: undines (water), salamanders (fire), sylphs (air), and gnomes (earth). He called these beings elementals. From the 17th century on, gnome variants such as brownies and leprechauns also appeared in folk tales. Elementals continued to play a role in the early 20th century. The German anthroposopher Rudolf Steiner, for example, adopted Paracelsus’ terminology in his esoteric work.

But no doubt Paracelsus based the terrestrial gnome elementally on the mythological subterranean dwarf creature that first appeared in ancient Norse sagas.

The originally Icelandic poem ‘de Edda’  from 1222 is actually the basis of the dwarf phenomenon. The Edda paints a fairly complex picture of the dwarf. Sometimes they are ordinary human and at other times they have supernatural gifts. There are four dwarfs created by the gods who gave them the task of supporting the sky with their shoulders: Nordri, Sudri, Austri and Westri. The story about the wolf Fenrir also involves dwarves who, as blacksmiths, had to forge an unbreakable chain to keep Fenrir in check. And there are also downright vicious dwarfs like the two brothers Fjalar and Galar who killed the old sage Kvasir.

Subsequently, in all kinds of successive Norwegian sagas, an image emerged of dwarfs who like to nest in the cold dark at the bottom of the mountains. There their mining qualities came in handy where they especially developed a greed for gold and gemstones. They seldom came out kindly, fearful that people might want to steal their precious possessions.

It is therefore surprising that in subsequent Irish and Breton folklore dwarfs were portrayed more and more helpfully, literally making their way up to gardens and farms where they assisted people and farmers; and where they sometimes even richly rewarded people who in turn helped the small people.

Dwarves and their off-spring gnomes have gained great popularity over the last 150 years. Whether they really exist or not seems almost irrelevant. When we still had the Elf Fantasy Shop shop in Delft, now and then customers came in who insisted that they were in contact with gnomes and dwarfs and could see them. From then on I have always taken the position that it would be possible, even though I was unable to discover these elementals on my own. Why should I be so arrogant to argue with these people just because I couldn’t see what they claimed to see?

But whatever the case, the bearded natural beings have gained the sympathy of entire population groups, especially in Europe. The “gnomophobia”, turned out to be only temporary. Thanks to film adaptations such as “the Hobbit” in which the dwarf race played an important role, dwarfs have even gained almost cult status among fantasy enthusiasts. Gnomes and dwarfs will undoubtedly continue to be heard in the coming decades.